The game is packed with an enjoyable theme with imagery lending from the 60’s surf era, such as the ever-famous Volkswagen Microbus.

In addition to an exciting sun and surf theme, Cash Wave is a flat-top video slot that features 5 reels, 40 paylines and a bonus game developed to ensure players see a wave of cash on the horizon.

Cash Wave online slots have an extremely user-friendly form of navigation, with a bar at the bottom of the screen allowing players to control the amount of coins placed per bet, spin the reels, explore help on various pays and more.

The Bonus Game features a visually appealing effect of a wave rolling past the screen and washing away each free spin, displaying the finer touches, synonymous with releases from this particular developer.

In addition, Cash Wave slots have little music and audio effects other than the standard whimsical winning sounds that are well-known and usually found in Bally Technologies’ slots.

With consistency in the theme, Cash Wave slot reels offer attractive symbols, representative of a sun-kissed blonde woman, a VW van, a beach towel and sunscreen, and a pair of sandals and a wild symbol. These symbols form the higher value symbols, with the wild and woman symbols bring in the highest winnings.

The Wild symbol substitutes for all symbols, excluding the Free Games symbol, and can be highly rewarding for players if it appears on an active payline. 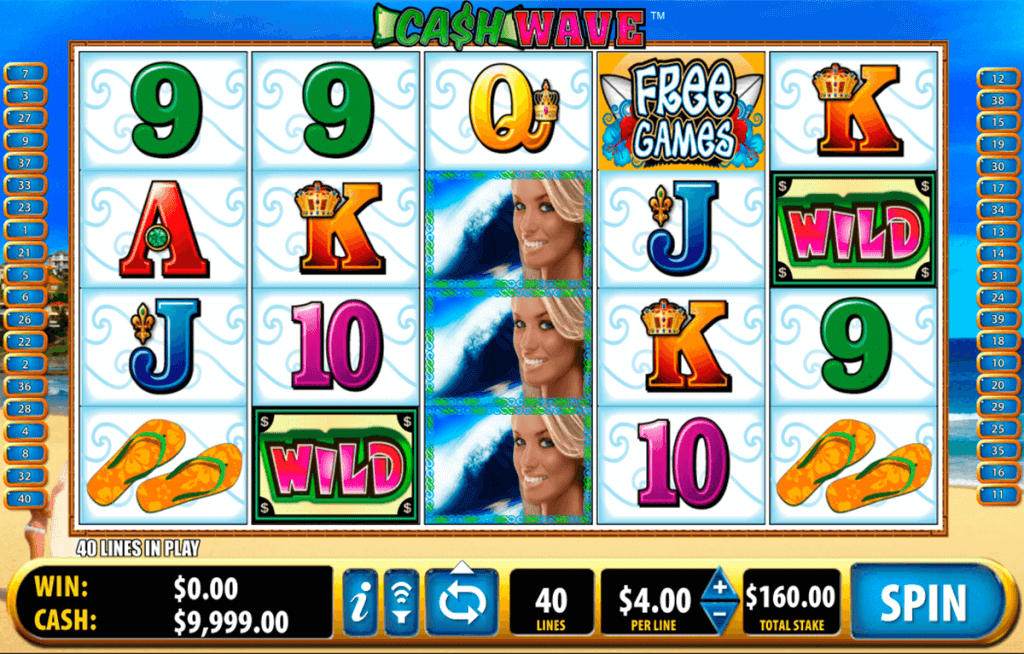 Cash Wave slots feature conventional coin denominations, which start at 0.01 and go up to 10.00. The maximum bet sits at 400.00 with the payline fixed at 40.

The game features what is known as a dynamic paytable, meaning it reflects the actual payouts according to the player’s current bet.

Starting with the leftmost reel, all pays are adjacent on an active payline and go from left to right. Only the highest win is paid per line played.

The Stacked Wild symbol only appears in the free games bonus feature and is wild. This, however, differs from the usual wild symbol as it covers an entire reel and gives a much greater chance at winning.

The bonus feature in Cash Wave online slots is activated when the Free Games symbols appear anywhere (but only) on reels 2,3 and 4 within the same same spin.