The Viking Age slots game from developers BetSoft takes as its theme the mighty pirate raiders and settlers of Northern Europe’s seas during the Dark Ages: the Vikings. Viking Age’s five reels and three rows spin against a sturdy wood-and-stone frame carved with runes and mythic Scandinavian animals, set in a woodland clearing.

The game features 30 bet lines, with coin denominations ranging from 2c to $1, and a maximum of five coins per bet line, making a maximum bet per spin of  $150. Alongside the reels, buxom plait-tossing Viking girl Amma roots for the player in a surprisingly plummy English accent, but she’s not above sarcastic remarks if the player is taking too long to make a choice, too.

An appropriately drum-heavy martial theme accompanies the action, and all the game’s icons also mirror the Viking obsession with wars for booty and conquest.

Viking Age employs none of the standard poker low-value symbols; all its icons are relevant to the Viking theme. There are three low-value symbols; a Viking shield, a Rune stone and a long ship’s Dragon prow, and players need a match of at least 3 in succession on one bet line from the left-most reel to score a win.

The higher-value icons begin scoring prizes with matches of 2 or more. In ascending order of value, these symbols are a jewelled Crown, a Battle-axe, a Longship, red-haired Viking Erik and blond Viking Elgrim. The lowest win is 4 coins, for a match of 2 Crowns, and the highest possible win in normal play is paid for 5 Elgrims on one bet line: 300 coins. All the Viking Age symbols are rendered in rich, realistic detail.

At the end of every spin, each winning bet line in succession lights up, and any icons in the winning combination perform a vivid animation, so the game rewards players visually as well as financially for wins. 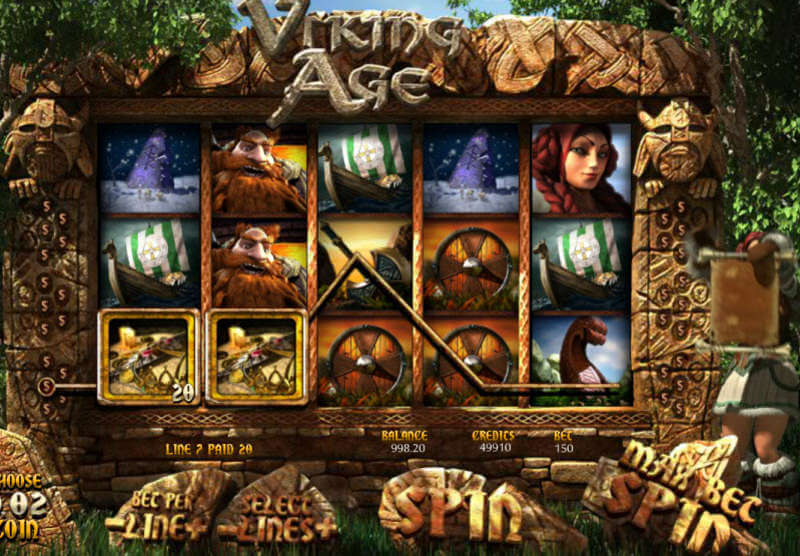 The biggest draw-card in the Viking Age slots game’s favour is the three bonus features that can seriously enhance wins.

A special bonus icon triggers the Runestone Feature; a fallen Viking warrior’s Helmet, resting on his grave. 3 or more Helmets after a spin trigger the Runestone Feature, in which the play zooms in to focus on the frame, and the player must decide which rune Amma should pick. The player is rewarded with instant credit, free spins, or immediate access to the bonus round.

Amma also features on another bonus icon on the Viking Age reels, and 3 or more Amma icons will trigger the Multiplier Free Spins Feature. The frame reveals a series of multipliers on either side of the reels, all of which spin along with the reels on each of the ensuing free spins. If the left-hand and right-hand multipliers match on either end of a winning bet line at the end of the spin, the specified multiplier multiplies the win on that bet line.

The third bonus icon in Viking Age features two giant, humpbacked Vikings Arm-Wrestling. 3 or more Arm-Wrestling symbols triggers the bonus round, in which the player must choose which Viking will win the contest. If the player guesses correctly, they win even more playing online blackjack Canada. The biggest jackpot on offer in Viking Age is 1,500 coins.